Why Should You Opt For A Ceiling Fan With LED Light?

Why Should You Opt For A Ceiling Fan With LED Light?

A few decades ago, most ceiling fans were used only for improving air circulation and cooling. However, with advances in fan design and technology, homeowners can now install a ceiling fan with light in one or more rooms of their house, to save money and space. Though the cost of ceiling fans with light in Singapore will be slightly higher than a conventional fan, there are many advantages of doing so. Increasingly, most ceiling fans come with LED lighting due to multiple benefits which are discussed below.

What Are LED Lights?

Nowadays, most property owners are using LED lights with light emitting diodes for illumination because the energy consumption of these LED lights is far lower than other lightings like Compact Fluorescent Lamps (CFL) and incandescent lighting. It is also easy to adjust the lighting intensity and the color for LED lighting, unlike other types of lighting.

Typically, a lighting fixture will consist of a large number of LEDs that are connected to the power supply. Depending on the light output required from the LED light, the specifications of each LED used will vary. Some popular ceiling fan brands that come with LED lighting include the Alpha Ceiling Fan, Crestar Ceiling Fan, and Spin Ceiling Fan. 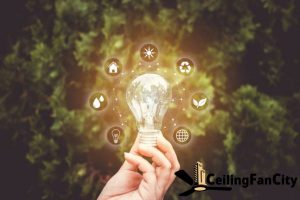 Homeowners in Singapore are opting to purchase LED lights because the power consumption of these lights is significantly lower than CFL or incandescent lighting for the same light output. Compared to other lighting methods, less heat energy is produced by LED lighting, so most of the electrical energy is converted into light energy. Due to the energy efficiency of LED lighting, power consumption will reduce if older lighting fixtures are replaced with a fan that has inbuilt LED lighting. This is definitely one of the reasons to buy a ceiling fan with lights.

Saves A Lot Of Money 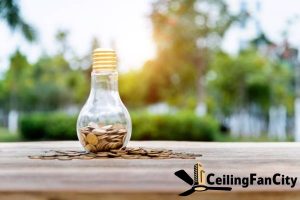 Usually, the light bulb or lighting fixture is fixed on one of the walls in the room. This results in uneven distribution of light in the room. The area near the wall where the bulb is installed will be brightly illuminated, while there will be less light in the areas which are away from the bulb. Due to this, most of the time additional lighting using torches or handheld lamps are required for areas that are not well lit.

In contrast, since a ceiling fan with light (e.g., Spin Quincy 52″ DC Ceiling Fan) is usually installed in the center of the room, all the areas around the fan will be well lit. Therefore, additional lighting is usually not required. It is recommended that you follow a ceiling fan buying guide before purchasing a ceiling fan with LED light so that you can better decide on which type of ceiling fan you prefer.

There are different variants of ceiling fans with LED lighting to suit the requirements of the customer. For outdoor areas like the balcony, fans with ABS fan blades are available so that they do not get affected by high moisture levels. This type of fan is available in different blade sizes to match the size of the room. Smaller rooms usually have fans with 43” fan blades such as the Spin Savannah 43″ DC Ceiling Fan. In the bathroom, the fan can be used to reduce humidity and drive away foul odors, while in other areas it is used for cooling.

It is usually possible to customize lighting fixture that is installed on the ceiling fan, depending on the illumination which is required by deciding on the brightness and color spectrum. Often, the illumination intensity can be easily adjusted using a remote control, such as the Spin Espada 43″ DC Ceiling Fan. Fan color can also be customized to match the room decor. It is recommended that you learn more about the important tips when choosing the right ceiling fan with lights as one of them is about how to select the right lighting such as warm white, cool light or day light.

Compared to most other types of lighting fixtures, the life of LED fixture is far higher. Though LED fixtures are slightly more expensive, they can be used for several years, so maintenance expenses are greatly reduced as compared to incandescent bulbs which need to be replaced often.

There are various benefits that you can enjoy if you choose to install a ceiling fan with LED light. Such benefits include – energy efficiency, great cost savings, great light distribution, customizable lighting, durability of LED and versatility in blade type. Once you have selected a ceiling fan with light of your choice, it is advisable to engage a professional to help install it. A professional will be able to install your ceiling fan properly so that it functions well and most importantly ensure your safety.

A reliable company that you can engage is Ceiling Fan City Singapore. Apart from the reputable ceiling fan brands that they carry, their team of experienced electricians have the right tools to install your ceiling fan with LED light to the highest standards. You can certainly be assured that you will not encounter any problems in the future.