Ideally, the ceiling fan should be almost silent. If there are vibrations or any damage to the fan components, it is often a sign that one or more components of the ceiling fan has become loose or is not properly aligned. Dirty bearings may also be the reason why the fan will produce noise.

When the fan makes a grinding, squeaking, or buzzing sound after it is switched on, it is often an indication that there is a problem in the fan. In other cases, intermittent noise and sound from the fan may be heard. If you encounter this, there is a high possibility that you will need to replace your ceiling fan. It is advisable to learn more about some important tips when choosing the right ceiling fan with lights if you are looking for a replacement.

Sometimes even after the blades are aligned and screws/bolts are tightened, the ceiling fan may wobble. This indicates that some other component in the fan is loose or damaged and that there is a possibility that some part of the fan will fall off. Hence, it is advisable to replace the ceiling fan at the earliest time possible. It is also important to engage professional ceiling fan services as a professional will install your new ceiling fan properly so that it functions well. 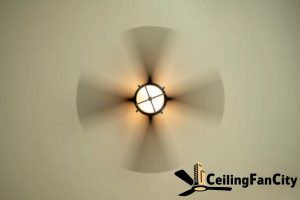 One of the facts you might not know about ceiling fans is that it is supposed to produce healthier air by circulating the air at a high speed. This will help evaporate sweat from the skin to produce a cooling effect. However, in some cases, due to malfunctioning of the fan, the airflow or air circulation from the fan is reduced. Due to this, people in the room do not get to experience sufficient cooling, though the fan is switched on.

One of the things to consider when purchasing a ceiling fan is its motor as the air circulation and cooling of the fan depends to some extent on the fan motor speed. After a ceiling fan has been used for several years, some of the components of the motor may get damaged or worn out, reducing the fan’s speed. Even if the fan is set at top speed, the air circulation will no longer be adequate to provide the cooling required.

When a ceiling fan with light approaches the end of its lifespan, its light often starts to flicker. In other cases, the flickering light could be due to a loose contact, damaged component in the light or loose wire. Since the fan is switched on for long periods of time and is rotating at a high speed, the vibrations from the fan are very likely to cause loose contacts, resulting in flickering of the lights.

If you are encountering this issue with your ceiling fan with light, you may want to consider another reliable ceiling fan brand such as the Spin ceiling fan. You can consider the Spin Quincy 43″ DC Ceiling Fan which has a dimmable light feature and the options of tri-colour temperature such as day light, cool white and warm white. 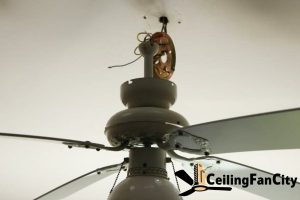 In some cases, the fan cannot be switched on using the electrical switch, though the remote control is working. In this case, the wires connecting the fan to the switch may have become loose. As the fan is often rotating at a high speed for more than ten hours daily in many homes, the vibrations from the fan can make the electrical connections loose after several years.

In cases whereby connectors are used, the wires can be tightened. However, for other connections, ceiling fan replacement is recommended. In case you are considering replacement, it is important to engage a professional to install your ceiling fan as it will be done properly and safely. 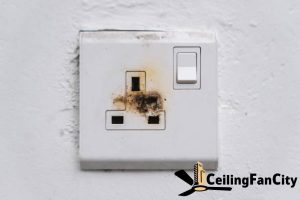 In some cases, the socket may get burnt due to short circuit or fluctuations in power supply, especially high voltage. The socket may also get corroded due to high humidity levels. A tester can be used to check if the socket is corroded, or damaged.

It is also advisable to engage a professional company to replace your ceiling fan as they will ensure that your fan is installed to the highest standards. Ceiling Fan City Singapore is a recommended company as they have an experienced team of electricians who are equipped with the right tools and skills to ensure that your ceiling fan with light is installed properly and safely. Apart from this, they also offer a range of reliable ceiling fan brands for you to select from.