Ceiling fan manufacturers have developed many models of ceiling fans to meet the needs of their customers. One of the main differences between different models of ceiling fans is the length of the blades and the number of fan blades. Most of the list of popular ceiling fans in Singapore will include one or more models of the Crestar brand due to their superior design. Property owners who are planning to have a Crestar ceiling fan installation should be aware that while most of the Crestar fans have three blades, a few fan models like the Crestar ValueAir have five blades. Hence, the Crestar Ninja and Crestar ValueAir fans are discussed to help buyers make the right choice.

The Crestar Ninja Air 42″ DC motor ceiling fan with three fan blades is one of Crestar’s most versatile fans, designed for most rooms up to about 140 square feet. The fan is available in 42″ and 48″ blade sizes. Depending on whether you need a fan to cool or heat the room, you can change the direction of rotation of the fan from clockwise to counterclockwise. If you are wondering why purchase a Crestar ceiling fan for your home, it is because one of its features is its fan speed where you can choose from six different settings depending on the airflow required. There is a provision for fixing an LED light for illumination at night below the fan.

One of the things to consider before purchasing a ceiling fan is to know what size to get that fits the size of your room for more efficient air circulation. The Crestar Valueair 5B 48″ DC motor ceiling fan is one of Crestar’s largest ceiling fans with 48″ and 55″ blade sizes. The five blades in the fan make it look like a large flower installed on the ceiling. This fan is suitable for installation in larger rooms, where more air circulation is required. The fans are available in three different colors, white, black, and brown, allowing you to choose a color that suits the decor of the room. The fan speed can be adjusted from low to high in six steps. LED lights can be fixed under the ceiling fan.

Which One to Choose?

While both share the same benefits of installing Crestar ceiling fans, they mainly differ in the fan blade size and the number of fan blades in the ceiling fan. Ninja-air ceiling fans have smaller blades at 42 and 48 inches, so they can be installed in smaller rooms. By comparison, the ValueAir Crestar ceiling fan has only 55, 48-inch long blades, making it most suitable for larger rooms with plenty of ceiling space. In addition, the ValueAir fan has five fan blades attached to the motor, so the air volume and energy consumption of the fan will be greater. 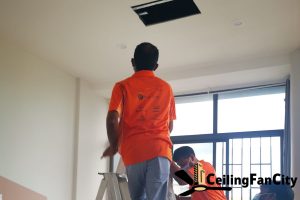 Property owners who wish to purchase a Crestar ceiling fan should be aware that while most of the Crestar fans have three blades, a few fan models like the Crestar ValueAir have five blades. If homeowners are trying to figure out which from Crestar’s ValueAir and Ninja Air to get for their homes, it is best to consult with a professional ceiling fan installer like Ceiling Fan City. They can help you from choosing which ceiling fan fits your home based on your requirements.  They can even install it effectively and efficiently for you.