Which Alpha Vannus Series Ceiling Fan Should I Buy?

Which Alpha Vannus Series Ceiling Fan Should I Buy? 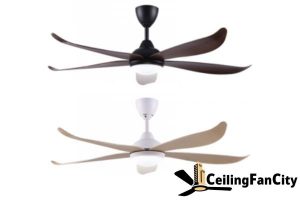 Fans in the Alpha Vannus Luna series have five ABS fan blades, ABS body, six speed settings, and an option to change the direction of rotation. They can be controlled using a remote control and have a 25W inbuilt LED light. The height of these fans is 13”. The different models vary mainly in the fan blade size, motor rating, speed, and colors which are available. These differences are described below. It is also recommended that you learn more about the reasons to install an Alpha ceiling fan so that you are better able to decide if you prefer this ceiling fan brand.

This model with 5 blades is of size 56″ which makes it suitable for larger rooms. The fan speed range is between 78 to 205 rpm with airflow produced at 12,378 cfm, though the motor rating is higher at 40 watts. One of the facts that you might not know about ceiling fans is that a lower speed is more effective for larger blade fans such as this fan model. This fan is available in four matte finishes such as black, white, black/walnut and white/maple. You may want to check out the Alpha Vannus Luna 5B LED 56″ if you want to install a ceiling fan for a bigger room.

This 5 blade Alpha ceiling fan is of size 46″ and can be used in average sized rooms. It has a high motor speed range between 90 to 250 rpm. The maximum motor rating is 35 watts, though power consumption depends on fan speed. White/maple and black/walnut are some of the popular color combinations available. You may want to check out the Alpha Vannus Luna 5B LED 46″ ceiling fan if you intend to install a ceiling fan for an average sized room.

This is the smallest 5 blade Alpha ceiling fan with an overall size of 40”, designed for use in smaller rooms. The motor is rated for power consumption of 35 watts, and fan speed range is higher between 120 to 290 rpm. The color options are black/walnut, white/maple, black and white. You may want to check out the Alpha Vannus Luna 5B LED 40″ ceiling fan if you intend to install a ceiling fan in a smaller space. 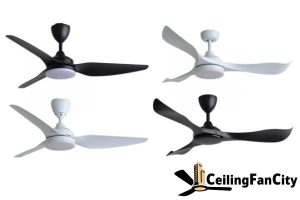 Fans in the VC2 and VC3 series have three ABS fan blades, with a DC motor enclosed in ABS housing. Users can choose from six possible fan speeds, as well as adjust for natural wind and clockwise or anticlockwise rotation using the remote control. The power consumption of the motor is higher at 40 watts, and they come with a 25W LED light. These ceiling fans are energy efficient and therefore one of the reasons why you should opt for a ceiling fan with LED light. The different models in this series vary in dimensions, motor speed and airflow.

The height of this Alpha VC2 fan is 12″, with the speed range between 90 to 225 rpm and the airflow produced at 6,358 cfm. This Alpha Vannus VC2 3B LED 52″ ceiling fan model comes in colour options such as black, white, and walnut.

This fan’s airflow is higher at 8,090 cfm, though the height of the fan is shorter at 11″ and speed range is lower between 90 to 215 rpm. This Alpha Vannus VC3 3B LED 52″ ceiling fan model is also available in walnut, white and black color.

Regardless of which Alpha ceiling fan that you select, the performance of your fan will depend to some extent on whether it is installed properly. For a ceiling fan to function well, a ceiling box must also be installed correctly. Therefore, it is important to engage a professional to install your ceiling fan as they will have the right tools and experience to ensure that the task is done properly.

A professional company like Ceiling Fan City Singapore will be able to help you install your Alpha ceiling fan to the highest standards as they have a team of experienced electricians who are equipped with the right tools. Not only this, they will also offer you with advice on which ceiling fan in the Alpha Vannus Series is the right one for you. Whether you are installing a ceiling fan for the first time or replacing an existing one, you will not go wrong by engaging professional ceiling fan services. Rest assured, your ceiling fan installation needs will be well taken care of.

After learning about the main features and differences in the various models of these popular ceiling fans in the Alpha Vannus series, you may have a particular fan model in mind that you want to purchase for your home. However, not only is the ceiling fan selection important, the way in which it is installed is also critical. Although some homeowners may attempt a DIY ceiling fan installation, it is advisable to hire a professional to get the job done. This way, you can be assured that your ceiling fan is installed properly and safely so that you do not encounter any issues in the future.